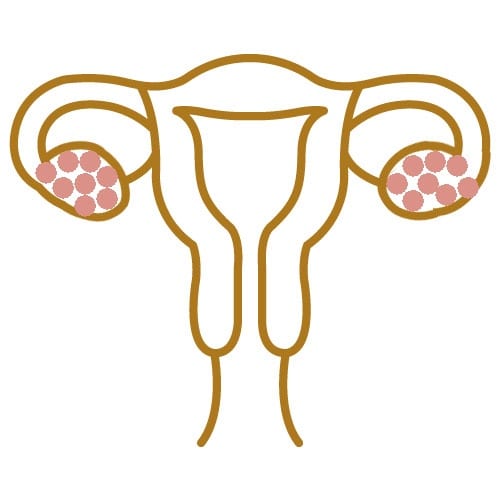 Polycystic ovary syndrome (PCOS) is a common condition that affects how a woman’s ovaries work. Women with PCOS do not release eggs from their ovaries, something that typically happens about 13–15 days before the start of each period.

The 3 main features of PCOS are:

If you have at least 2 of these features, you may be diagnosed with PCOS.

It’s thought to be very common, affecting about 1 in every 10 women in the UK. The exact cause of PCOS is unknown, but it often runs in families. More than half of these women do not have any symptoms.

Symptoms usually become apparent during the late teens or early 20s. They can include irregular periods or no periods at all, difficulty getting pregnant as a result of irregular ovulation or failure to ovulate, excessive hair growth (hirsutism), thinning hair and hair loss from the head (alopecia), weight gain, oily skin or acne.

Due to lack or irregular ovulation PCOS is associated with infertility. With treatment, most women with PCOS are able to get pregnant. PCOS is also associated with an increased risk of developing health problems in later life, such as type 2 diabetes and high cholesterol levels. It’s related to abnormal hormone levels in the body, including high levels of testosterone and insulin (a hormone that controls sugar levels in the body).

There’s no cure for PCOS, but the symptoms can be treated.

We use cookies to ensure that we give you the best experience on our website. If you continue to use this site we will assume that you are happy with it.AcceptPrivacy Policy