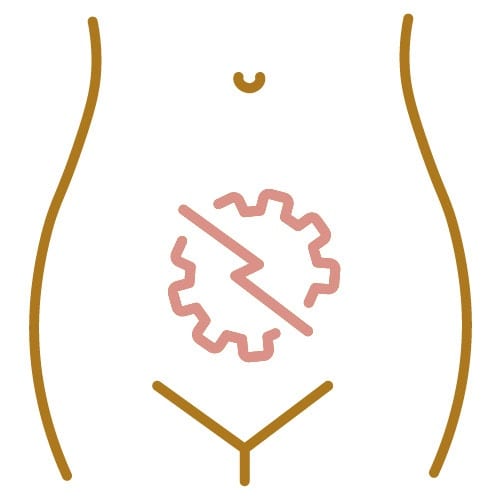 A menstrual period is the part of a woman’s cycle when the body discards the monthly build up of the lining of the uterus. For most women this happens every 28 days but it’s common for periods to be more or less frequent than this, ranging from 21 to 40 days. The period usually lasts for about 5 days, with some variation.

Definition of heavy periods is difficult as heavy can be different for different people. However, a good indication is if you are passing blood clots, having to constantly use extra protection or if you are bleeding through your clothes or bedding.

Nearly 50% of women will suffer from heavy periods at some stage of their life.

The most common causes are uterine fibroids, endometriosis, adenomyosis, hormonal imbalances, polycystic ovarian syndrome, perimenopause and endometrial pathology such as endometrial polyps, hyperplasia or cancer. It can also be related to medication you take or intrauterine contraceptive devices (coils).

Amenorrhoea is the absence of periods and can be primary (failure to establish menstruation by 15 years of age) or secondary (cessation of menstruation for around 6 months in women with previously regular cycles. Amenorrhoea is normal in pregnancy.

Oligomenorrhea is when the menstrual cycles are very light or infrequent, more than 35-40 days apart.

Oligomenorrhoea is common in adolescence and it usually requires no treatment.

In adult women, skipping a period and then having a heavy flow may occur and is most likely due to hormonal imbalance linked to missed ovulation. If this happens only occasionally it is unlikely that it warrants treatment, however, if it becomes a pattern it needs further investigation. The most common causes are PCOS, emotional stress, excessive exercise, change in dietary habits, significant body weight changes and hormonal abnormalities. It can also be an indication of premature ovarian insufficiency.

Premenstrual syndrome (PMS) is a condition that affects a woman’s emotions, physical health, and behaviour during certain days of the menstrual cycle. The symptoms typically start in the second half of the cycle and resolve a few days after the onset of the menstruation.

PMS is a very common condition and has a significant impact on women’s quality of life.

We use cookies to ensure that we give you the best experience on our website. If you continue to use this site we will assume that you are happy with it.AcceptPrivacy Policy